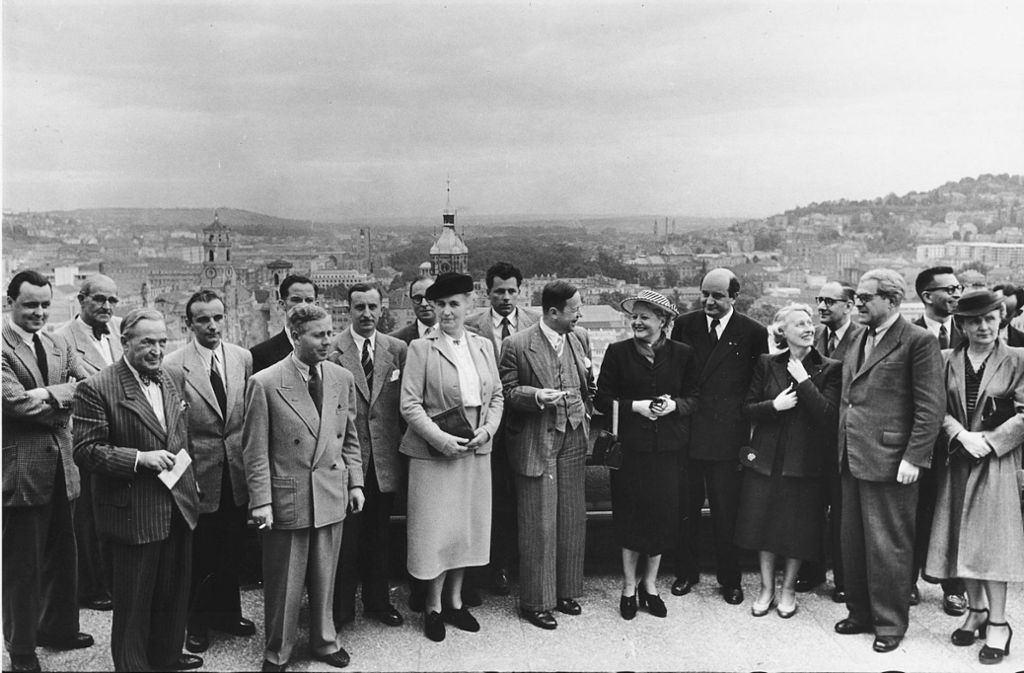 The editors of the Stuttgart newspaper, Josef Eberle (fifth from left) and Erich Schairer (right front), with editors and visitors on the roof of the Tagblatt Tower · Photo: Otto Maier

After the surrender, the Allies initially treat Germany as a defeated, not a liberated, country. For Democrats, the zero hour started late - also with the help of new media such as the Stuttgarter Zeitung.

Perhaps it is just a mirage of hope that French General Jean de Lattre des Tassigny tries to hold onto as World War II comes to an end. “People stumble from the cellars, staggering with joy,” is how he describes his first impressions of Stuttgart on April 22, 1945, when he occupied the city with his army. The feelings of the Germans at that time are not so clear and for most of them it is more ambiguous. “At least on this afternoon, most of the citizens I met had a feeling of liberation,” reports Rudolf Steiger, an eyewitness. There are, however, very good reasons why Federal President Richard von Weizsäcker, who was also born in Stuttgart, had to remind his nation 40 years later that it was actually an act of liberation. In any case, the end of the war, the capitulation of the dictatorial regime by no means zero hour for a new democratic beginning in Germany. The victorious powers do not even think of that at first. Immediately after the collapse of the Nazi tyranny, idealistic-minded democrats founded “fighting committees” in Stuttgart to reorganize social life. The French occupiers, however, strictly prevent this first attempt at democratic self-government. Party political activities remain prohibited for the time being. The new Lord Mayor installed the day after the occupation Arnulf Velcro still failed in June 1945 with the proposal to set up municipal councils to take care of the immediate interests of the city. Something like this "is out of the question for the foreseeable future and cannot be discussed in any form", he is admitted. This is what a book tells about “Stuttgart in zero years”. It was written the journalist Martin Hohnecker, who died in 2012, for many years deputy editor-in-chief of the Stuttgarter Zeitung and head of the local editorial team.

On May 24, 1945, OB Klett initiated something like a nominal democratization in Stuttgart. He has the street names hijacked by the Nazis renamed. The Adolf-Hitler-Strasse is thus back to plan. Elsewhere in the city map, too, idols of contempt for human beings have to give way to give way to patrons with a democratic mindset. The street named after the right-wing radical General Ludendorff will be a small memorial for the murdered Nazi opponent Eugen Bolz, once President of Württemberg. The French occupying power allows a bit of grassroots democracy: on May 31, it allows the establishment of a Württemberg trade union federation. The should support the military administration in social issues. After the Nazis had had a week-long break in broadcasting their “Volksempfänger”, from June 1945 onwards a civilized radio program could be received again. Responsible for the program of Radio Stuttgart is a man with relevant experience: Josef Eberle. Before the Third Reich he had worked for the Süddeutscher Rundfunk. As head of the lecture department, he turned down Hitler’s contribution and was promptly banned from the station when the Nazis captured the broadcasting house in 1933. Two months after his debut at Radio Stuttgart's microphone, Eberle was to become editor of the Stuttgarter Zeitung. More of that later. Even when the Americans took over the regiment in the city in July, democratic engagement initially remained taboo. Colonel William W. Dawson, military governor of the US Army in Stuttgart, emphasizes that "any political activity is currently prohibited". This is what the JCS 1067 directive wants, a kind of master plan for American occupation policy. “Germany will always be treated as a defeated country, not a liberated country,” explains Dawson as he takes up his post.

His verdict that this will "always" remain that way quickly loses its validity. Just a few weeks later, Dawson was denied in the bulletin of the American military administration, the only newspaper in Stuttgart at the time. There, the Swabian social democrat Fritz Ulrich writes that his compatriots should breathe a sigh of relief "that we are on the way to a free democratic state". In fact, at the Potsdam Conference in early August 1945, the victorious powers agreed “to prepare for the final transformation of political life on a democratic basis”. At Radio Stuttgart, the US officer Charles L. Jackson announced that he hoped that everyday life in the occupied city could soon be back to "normal democratic channels". The democratic new beginning then proceeds quite rapidly. On August 16, the Americans let the two liberals Reinhold Maier and Theodor Heuss stand at Olgastraße 11, where the military government is based. Maier is instructed to draw up a list of names for a future state government. He himself is to become prime minister - all without democratic legitimation. When Heuss approaches him and asks who could actually remove their government again, he replies: “Either the Americans or the French or maybe even the Russians. And if none of them do it, then the grateful Swabian people. "

"By order of the military government", Mayor Klett posted a notice on August 31, 1945 that "the formation of political parties on a democratic basis" was permitted again. However, meetings involving more than five people require approval. In one of his statements, Klett appeals to the Stuttgart: “Despite the fate that has affected each of us, only understanding can help bring about a breakthrough in justice.” However, understanding takes more than official announcements. The Americans will soon see that too. In August they have a weekly newspaper printed: the “Stuttgarter Voice”. But it is edited under the direction of the military administration. On September 17th, three Germans finally received the license for an independent newspaper: Henry Bernhard, Karl Ackermann and the very same broadcaster from Radio Stuttgart - Josef Eberle. “Es geht vorwärts” is the title of the leading article in the first issue of the Stuttgarter Zeitung, which appears the next day. It is only four pages long, but 400 copies are printed. The newly achieved freedom of the press is “the best remedy against the pessimism of our compatriots who see the hope for a better future buried in the ruins of our homeland,” writes commentator Ackermann, one of the three licensees. "Nothing can more clearly demonstrate our own honest intention to deal with Nazism than a judicious use of this first liberty in the sense that we distance ourselves from all methods of rape and any mortification of confident belief and free opinion." The founders are leaving soon their own way: Ackermann, who was in a concentration camp during the Nazi regime and is close to the Communist Party, later publishes the “Mannheimer Morgen”. Bernhardt, former private secretary of the Nobel Peace Prize laureate Gustav Stresemann, founded the Stuttgarter Nachrichten the following year. There, in turn, one could read about Eberle that during the Third Reich, his “vest remained as white as the wings of Pegasus”. He understood how "to give nobility to his non-partisan, liberal newspaper and to make it one of the most respected daily newspapers in the Federal Republic".

Eberle calls "Zeit" the "most educated German journalist". Perhaps the reason for this was Josephus Appellus. Eberle wrote Latin verses under this pseudonym, reminiscent of Ovid and Martial. But he also writes in a traditional Swabian language under the name Sebastian Blau. The man is actually a bookseller by profession. After the Nazis showed him the door on Süddeutscher Rundfunk, they locked him up in the Heuberg concentration camp for six weeks. In 1936 he was expelled from the Reichsschrifttumskammer. Shortly before the end of the war, he had to go into hiding with his wife, who came from a Jewish family. Eberle remained managing editor of the Stuttgarter Zeitung until 1971, fifteen years later he died a few days after his 15th birthday. The paper has become his life's work, writes Oskar Fehrenbach, who later became editor-in-chief. And this life's work “was based on the will to do everything in his power to ensure that the rule of brown terror could never be repeated; and it was precisely the tolerance learned from Voltaire that heightened Eberle's instinct for any form of intolerance, political one-sidedness and party-political illiberality ”.

Source: Article by Armin Beetle in the Stuttgarter Zeitung on April 8, 2020