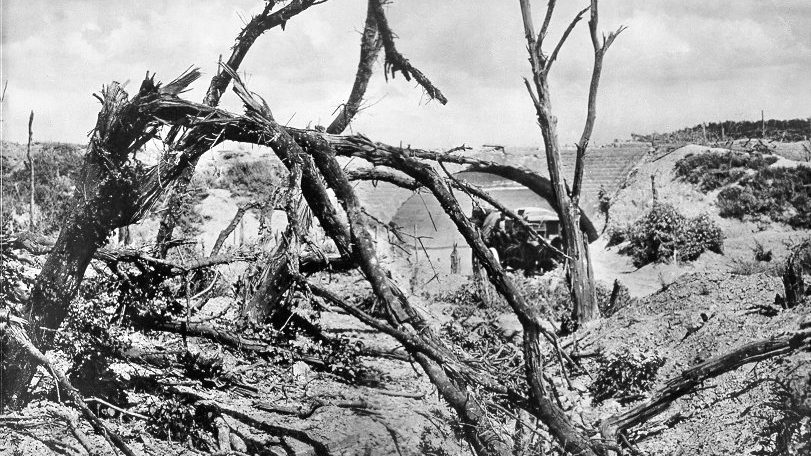 Spring! This is something like this: a sweet idea of ​​delicious summers is in the air. The wide sky is eternally cheerful and carefree, and a gentle melody swings through infinite spaces. A whole assortment of wonders is thrown out with cheerful gestures. Days, dreamy in the mild smile of God, the flower is called and dew and pulling cloud and WellenspieL The whole lightly outfitted with Eichendorff-feeling as an extra bonus for us Germans.

But the “German” philistine, shattered by revolution, democracy and fate, gathers mourning around the grave of a deceased militarism and plants the flowers of his Pan-German hopes with loving hands into the laughing spring.

Frühlingswinde lispeln in German accent an ancient song. Powerful visions rise from magnificent spring parades, from the pacing of German regiments, from whiskers to the sky, half-goddled to heaven, from hands obediently to trousers, from courtly splendor and celebrations. In the distance, a delicious summer beckons: Germany freed from Jews and idealists, reflected in the shine of his helmet tips.

Oh yes! If spring falls on them now and they lie down somewhere in a spinach green corridor and the cord dangles melancholy on the loden shirt, when they lie there dreaming up to the clouds, they always only dream this; every drop of dew reflects it; every bird song knows only this way and all clouds train only goes this way.

One would like to be a psychiatrist in order to understand people who, out of a mad rush of blood and destruction, suddenly awake into reality, after a few months already curse the moment of awakening. Who have enjoyed the gruesome intuition of an eerie rampage and yet no longer understand why they once in a natural disgust have thrown the murder weapons.

One would like to understand why a people at the high level of science, such as the German one, can not explain, by means of this scientific thinking, the long path of an unfortunate development to catastrophe.

As much as the Zulu Kaffirs are known, they should have the ability to learn from past evil experiences. We have the dismal example of Germany that a people can lose a world war and still carry on in the old waters, with the same vague fantasies and the same earthly dreams.

Should not anything be learned from the Zulus?

We stand shaken this spring, at the end of a short period of time, when some hope has sprouted in us. Once, in November 1918, when the people freed themselves from their shackles, the seeds of hope sprouted shyly. Quite a few called it a revolution. Poor people! How many hopes and ardent longings did you express with it! Today we know. It wasn't a revolution. It was an unfortunate mistake! It was a small derailment of the German psyche. Nothing else. The short way from then to now demonstrates this admirably. Thousands are lying down with rifle butts, shot from behind "on the run", trampled to death in commissary boots. The spirit of 1914 is still alive. It has also proven itself in the civil war. His methods have been further developed. And what remains in some people's minds from “the days of shame”, one tries to drive out completely with rubber truncheons, stink bombs and bullying!

Forget the madness of the world war. Forget the rivers of blood. Forget the horror of the battlefield, the animal ecstasy of the giant slaughter, the grandiose work of ingenious extermination technology, forget the embarrassment of the Marne battle, forget the nonsense of Verdun and much more. To forget! Nothing stuck in these heads of the gruesome ghost.

What's left is just a vain phrase: the stab from behind and all the cabbage too disgusting to warm it up.

That millions under the earth vegetate modern and hundreds of thousands of cripples, who speaks of it! In the meantime, we hear of tolerant, god-given princes, who in exile consume their millions. It is disgusting.

This is German spring. The sun is laughing. Unexpected miracles open up. You want to give yourself up and be human. But one is placed in the misery of the “German” state machine as the object of a lovely administrative bureaucracy. If you didn't have people here and there, for whose sake it is worthwhile to stay, you embarked somewhere, far away.