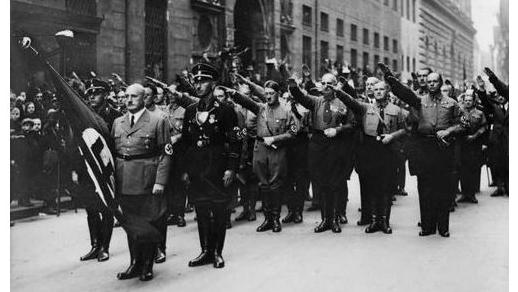 [...] The main editor speaks about the "nature, principles and goals of the National Socialist German Workers' Party" in a programmatic brochure Alfred Rosenberg of the "Völkischer Beobachter". The program in itself is very interesting in more ways than one. It demands the right to self-determination and equal rights for peoples, just like socialists and pacifists - Hitler preaches domestic and foreign political violence and Dr. Dinter appeals to the "sword" with a theater pose. It calls for the nationalization of the trusts, the communalization of the large department stores - should that be used to fish socialists? Is the demand for the abolition of work and effortless income a National Socialist invention? Or the one after colonies, after land reform? Death penalty for usurers and smugglers, registration of the war profits, annulment of the peace treaty etc. These "demands" blind the masses without judgment for a moment. Hitler never shows the way to these goals. The whole program is deception and deception in order to capture the masses for the actual "goals". And these are: clumsier Antisemitismus and war of revenge, Mr. Hitler leaves no doubt about that. Anyone who hears him talking in his meetings is not deceived about it. Beat the Jews and the French! This is the gospel of these most limited of all nationalists. And they understand it well, to make mood for it. Unfortunately, both Jews and French are unreachable to the Nazi fists, and as long as the Jewish servants and friends of the French, who call themselves socialists, serve as whipping boys ...

On a Friday morning I came to Munich. I expected, according to the reports given to me, at least on the breast of every second Munich, a stately swastika. I was disappointed. All through the day, I only saw this abused sign twice, both times on the neck of young ladies. In the evening one of the Hitler's mass meetings in the circus Krone instead of. Two hours before the start, the hundreds gathered on the Marsfeld. Hitler has about 30 hundreds, of which only a few reach the number one hundred. For the most part, they are made up of young workers and employees who enjoy playing soldiers. With a steel helmet on your head or a gray ski cap with a black-white-red cockade, a red bracelet with a black swastika in a white field, you feel too interesting. And first of all the mysterious orders and hints of the superiors! “Heightened alert today and tomorrow!” Whose chest shouldn't swell with pride? And when you sit in the Hofbräukeller in the evening with your "Moaß" and throw around the strong expressions of the great master in front of the ears of the peaceful citizen, who shouldn't become self-confident? The Bavarian lives from the opposition at all costs [...]

Mr. Hitler is the type of demagogue, like him Mommsen (Roman History, vol. 5, p. 717) aptly portrayed in the person of Apion:

“Before the Emperor Caligula appeared the deputation of the enemies of Jews, led by Apion, also an Alexandrian scholar, the 'world bell', as Emperor Tiberius called him, full of big words and even bigger lies, of the most brazen omniscience and absolute belief in himself, if not of people, but knowledgeable about their worthlessness, a celebrated master of speech and seduction, quick-witted, witty, outrageous and absolutely loyal. "

Word for word applies to Hitler. In the first mass event he said the motto: "I will now hold eight mass events one after the other, and if fuel is poured into the fire this way, a miracle would have to happen if it does not come to an explosion". He kept his word. He appeals to the lowest instincts of the masses. His eloquence replaces the missing content with its dazzling form. He will make it explode, but it will sweep him away by itself.

But the German citizen is asleep. If it sounds too loud from Munich, he calls for the laws to protect the republic, for association and newspaper bans. Expecting salvation from such coercive measures shows an almost unique ignorance of basic political and psychological facts. Everything that is forbidden excites not only boys but also adults. The socialist law has only benefited the socialists. And Herr Hitler outwardly responds to any superfluous coercion with shouts of protest, but inside, smiling gratefully. There is only one remedy against the National Socialist spiritlessness: to oppose its positive republican-socialist spirit, which is very well capable of inspiring young people and which alone ensures a secure development of the whole. If this spirit becomes strong among our people, then we need not fear any National Socialist explosions. They are then just a swooning fireworks display of short duration. Large sections of the "Republican" population are Republican out of laziness and indolence. If you don't wake up soon, Herr Hitler's business will flourish; and Herr Hitler will then wake up those who are still asleep today with quite spirited kicks ...