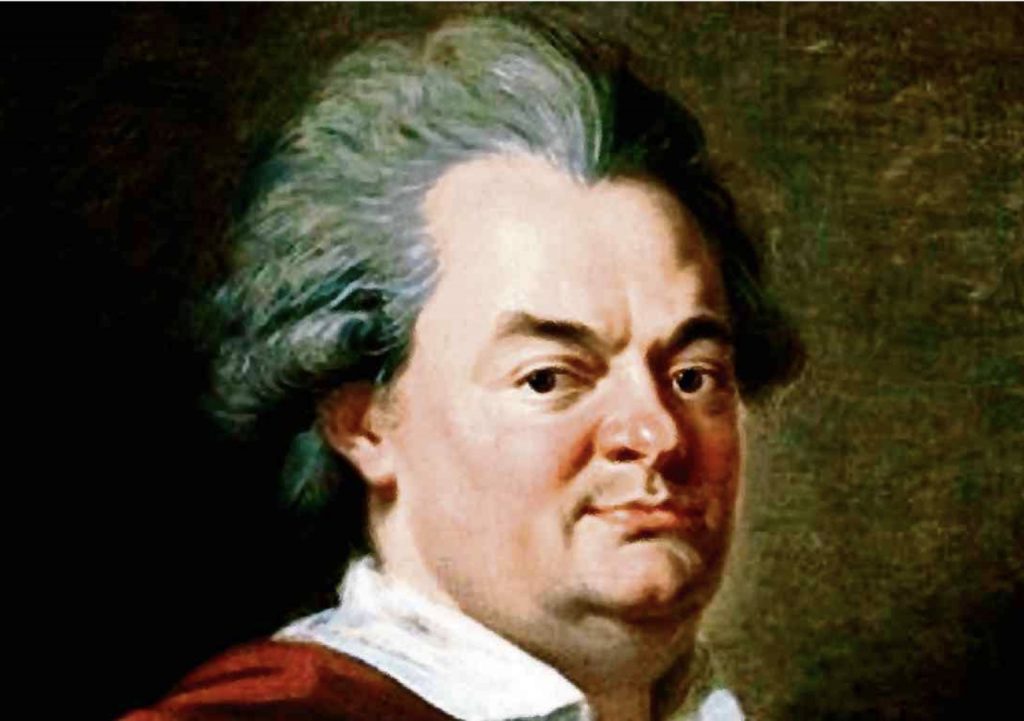 Tribute · Christian Friedrich Daniel Schubart spent four years in Ludwigsburg - two and a half centuries ago. · By Holger Bäuerle

The poet, musician and journalist Christian Friedrich Daniel Schubart came to Ludwigsburg 250 years ago. Four years later, Duke Carl Eugen expelled him from the city and thus from the country. A little later he publishes Germany's first national political newspaper. a step that should finally bring him to the Hohenasperg.

In the year of the French Revolution, the painter August Friedrich Oelenheinz portrayed a Swabian revolutionary. One of whom contemporaries said he was still “free”: the Schubart, born in 1739, the first major political journalist in Germany. From 1774, after he was kicked out of Württemberg, he edited his "German Chronicle" from the free - and thus safe - imperial cities of Augsburg and Ulm, which made him famous far beyond the state borders of Württemberg.

Powerful, like robust, rough, brazen, always close to the people, pictorial in word and style, he boldly attacks what stands in the way of his presence: princes absolutistically ruling, crawling, hunching courtiers, the "beating in the offices", the Catholic clergy. He clarifies and is suspicious of the Enlightenment, he is a striker and a pusher, he accompanies clairvoyantly German literature and delivers all the literary texts that have remained known to this day: The "Trout", "Die Fürstengruft", "Die Fürstengruft", " The Song ".

Ten years in prison finally brought Schubart his busy political engagement, his biting ridicule, his undisguised attacks on the powerful: From 1777 to 1787, Duke Carl Eugen arrested him on the Hohenasperg.

He had come to Ludwigsburg at the end of 1769. He and his family moved into the spacious house at Kirchstrasse 18, today's Schubart house. Against his wife's requests, he had decided to take on the post of music director and organist at the Württemberg court. As a sideline he gave piano lessons to the ladies of the fine society, initially giving lectures on history and aesthetics, taught by the literary professor Balthasar Haug.

Schubart quickly gained a foothold in the court circles - and looked ironically at what he was doing: "I am now a Hofmann!", He wrote to his brother-in-law Christian Gottfried Friedrich Boeckh, the principal of the Esslingen grammar school. “Proud, windy, ignorant, elegant, without money and wearing velvet pants. (...) My study has changed into a cleaning room, my desk into a toilet (...), And I'm chewing lavender instead of tobacco. "

This life was excessive, he supposedly had countless affairs with women, but in the tavern he sang Franziska von Hohenheim, the duke's mistress, as "Donna Schmergalina", who had to clean herself with the nit comb. Because of the "suspicious handling of a girl" he was temporarily put in prison, his wife Helene, born Bühler, left him with the children. In 1773, he had committed adultery with his household help, Barbara Streicher, by ducal decree he was expelled not only to the city, but also to the state of Württemberg.

A guy for a still image, sometimes heroic, sometimes sentimentally transfigured. A saint of freedom of the 18th century. A statement for the rebellious youth, one who should have worn Che Guevara on the T-shirt. The picture of the poet, as evidenced by his time in Ludwigsburg, is probably a more differentiated, more difficult one: Schubart was able to write poems that could shake the principalities - and in the same breath could serenade the princes' fame. "There they lie, the proud princes' debris, once the idols of their world!" It says there, others ripple in stanza-long thoughtlessness from refrain to refrain.

In 1787 the poet was released from the Hohensperg. He took over the management of the theater in Stuttgart and edited again, now with due caution, under the eyes of the Duke and his censorship authority, his "German Chronicle", which is now called "Fatherland Chronicle". He was more popular than ever, but the dungeon had drawn him. And the excessive eating and drinking after years of deprivation washed him up within a short time. The almost 50-year-old still could not let go of the game, of the women.

However, he was still allowed to experience the French Revolution. "Freedom, freedom, silver tone to the ear, light to the mind! Big heart feeling and free flight to think !! ”, he celebrated it in his“ Patriotic Chronicle ”. The joy of a man who had once troubled the absolutist world, who was defeated and broken, but could not be silenced. He still had two years to live after the big event. He died in Stuttgart in 1991 and his grave is in the Hoppenlauffriedhof.

Source: Article by Holger Bäuerle in the Stuttgarter Zeitung on April 17, 2020