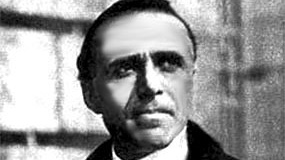 Giacomo Matteotti (* 22, May 1885 in Fratta Polesine, † 10, June 1924 near Rome) was an Italian politician, Secretary General of the Partito Socialista Unitario Italiano

In June 1924 is the Italian socialist [Giacomo] Matteotti murdered by fascists. In March 1926, the killers were partly acquitted, partly condemned so that in a few months they would again walk in the light of (Mussolini's mercy). Mussolini, the rapist of justice and humanity, has every reason to let the sun of his goodwill shine upon the condemned man: who knows what they would say if they testified! One does not know; but you guessed it, with a hundred percent hunch that weighs even more than our ninety-percent knowledge.

It has indeed been known that the trial of the murderers of Matteotti would be a cheeky play. Especially in Germany, we have not doubted that: because we have already experienced enough similar cases in our own country. However: that the bloodied boys would dare to lie as cheeky, as grotesquely rude as the main culprit Dumini did, even we would not have dreamed. He had the forehead to say that Matteotti had died of a hemorrhage; and the puncture wounds his poor, tattered body had been bugs that he had scratched himself.

A particularly instructive chapter for non-Italian judges is the verdict on the three murderers Dumini, Volpi and Poveromowho have not been acquitted like their accomplices. They were each sentenced to 12 years in prison for - murder? - no: because of manslaughter without any premeditation. But since it was not possible to determine who the real murderer was, 5 years were deducted from each. Remainder: 7. Now the jury had recognized mitigating circumstances. There was another print for that. The gods may know how it was calculated; it is clear that the punishment remained: 5 years 11 months 20 days. But the murder had political reasons, and there is an amnesty for political crimes. Therefore 4 years of the sentence were to be waived. So the end result: 1 year 11 months 20 days. And the guys have already served them up for a few weeks. So they'll be free soon. And everything is satisfied: the judges, the murderers, the fascists and Mussolini.

This is the face of fascism. Unscrupulous, brutal, insolent, scornful, as long as he knows he has power, he grins at us - beyond the Alps or on this side: it is the same everywhere.

The only beautiful, strong and worthy in the history of the Matteotti process is the Letter to the President of the Chieti jurythrough which Matteotti's widow, who had acted as co-plaintiff, withdrew her lawsuit when she realized how this process would be conducted. His name is: "Excellency! The murder of Giacomo Matteotti, a tragedy for me and my children, felt as such by every free man in Italy, had made me believe that the call for justice would not go unheard; this faith has upheld me in my utter jealousy and moved me to act as a private plaintiff. But in the vicissitudes of the investigation and the recent amnesty, the process-the true process-has gradually become insubstantial. What remains of him today is just a shadow. I had no hatred to express and no revenge; I only wanted justice. The people have denied me; I will receive you from the story and from God. I ask you, therefore, to allow me to stay away from the trial, which concerns me no further. My lawyers, who are also in solidarity with me right now, will give my decision a final form. To you, Excellency, I request that I be released from the agony of appearing before the assizes. It would seem to me as if I thereby insulted the memory of Giacomo Matteotti, for whom life was something terribly serious, the memory for which I live, lonely and torn, and in whose light I want to preach my sons and educate fearless people like her father was one. With respect, Velia Matteotti. "

That's the language of a Roman woman. If the Duce, the great culprit who had not stood in the way of Chieti, would not have been deaf to the voice of great, noble and free disposition, he would have to crawl into his hut like a dog, in his memory to his own, mendacious, big-mouthed Frasen.

But here in the cool, sensible North not even smaller, petty-bourgeois, healthier fascist mouth-moths recognize themselves - what can one expect from a mad, megalomaniac under the hot Italian sun?

The author of the murder of Matteotti is Mussolini. Intermediate instance between him and the murderers was his press chief Rossi, who subsequently fled abroad and accused Mussolini. Rossi was lured to Italy from Switzerland in August 1928, arrested and sentenced to 1929 30 years in prison in September.