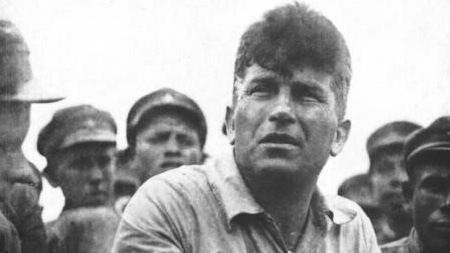 The communist press reports that one of the prosecution witnesses from the Hölz ​​trial had stated to a lawyer that he had withdrawn his earlier statements, which were incriminating for Hölz; they had been squeezed out by the judiciary. Before the same lawyer, a worker who had attended the shooting of the landowner Hess, for whose death Hölz ​​was sentenced to life imprisonment, stated that he knew the true perpetrator; he will only call him in court.

The thing Hölz ​​does not rest. In a lecture by the Red Aid in Frankfurt, Ms. Hölz ​​spoke in favor of reopening the case against her husband, innocently sentenced to life imprisonment, so impressively that even the "Frankfurter Zeitung" believes that it can be "expected" by the responsible authorities to deal again with the thing Hölz. Hölz himself has begun in the penitentiary with a presentation of his experiences; a section of it has already been published in a journal.

The friends of the unfairly condemned will not rest until they have achieved the retrial and replacement of the disgraceful judgment of 1921 by a Red General's actions. It will not allow this German justice to bury a man alive, simply because he hated the haves and thus rulers as leaders of the masses demanding justice. The authoritative passages are manifestly deaf and deaf in the Hölz ​​case, so hard of hearing that one almost gets the impression that they would not release Hölz ​​even if they were convinced of his innocence: because they fear him. Hölz is the whipping boy of our justice and of our entire bourgeoisie: by making him a monster criminal, the epitome of all that is bad inside them, they get the "good conscience," which they use as a gentle cushion for their sleep Need nights. Are you sleeping well, gentlemen? Well, we hope that someday we will pull that upholstery from under the sweet-slumbering head!

The bourgeoisie has made Max Hölz ​​the symbol of the mass; that's why the mass has recognized him as such. Only since his condemnation did Hölz, the leader of the Central German fighters, become the martyr and hero of the entire German proletariat. The way in which the trial was conducted against him and how he is treated in prison reveals the vulgarity of the disposition which is fought on the other side, and strengthens the loyalty of the masses to the decision of him to this justice to tear from the hands.

Let's not forget: on April 16, 1921, a price of 50 marks was advertised for statements that would lead to his conviction. The main witness, who claims that Hölz ​​shot Hess from the street, was convinced by a local appointment that this could not be true, whereupon he changed his assertion so that it coincided with the established facts and possibilities. However, neither Holz nor his defenders were allowed to attend this local appointment.

Let's not forget: Hölz ​​was refused to see a doctor. The seriously ill man was dragged from one prison to another through half of Germany. In response to his complaint, his gout swellings were declared "fat pads". As his wife claims, his cell window was walled up for a while. He was forbidden to write or receive letters for a few months. He has now been deprived of his library, which he was allowed to use for four and a half years. After Hölz ​​went on hunger strike, his wife was told: “If your husband has starved for fourteen days, we will feed him artificially; if he refuses to eat, he'll be dead in four weeks. "

That would be the most favorable solution for our "righteous": if Hölz ​​died. Then they would be out of embarrassment. That might suit them. So that you do not have this joy and this triumph: get involved with Max Hölz! Demands the resumption of the process!

Max Hölz ​​is on 18. July 1928 has been released from the detention center. A retrial because of the manslaughter of landowner Hess, whose offender has volunteered, is still hovering.