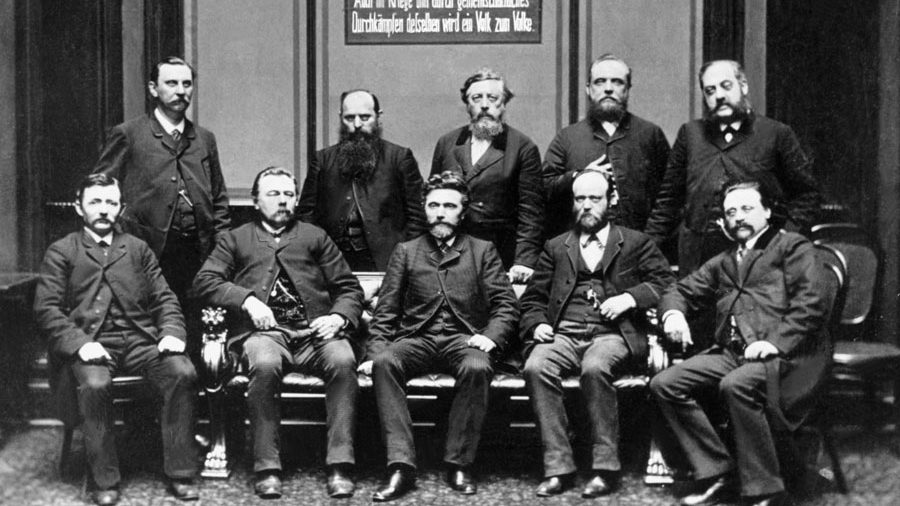 Leader of the Social Democratic Party of Germany (SPD) to 1900. In the back row 3.vl Wilhelm Liebknecht, in the front row 3.vl August Bebel. (© picture-alliance / dpa)

Party comrades! - I am a “comrade”, namely one of the majority (or soon to be minority?) Party; and I am speaking to you from this speaker's platform, because from the stage of the “Tagwacht” or the “Social Democrats” I could not speak as I have to speak ...

Party members! It is now back with the election of the moment, which puts you in the hands of a political decision, the decision on what will become of social democracy in the future. And it all depends on you having the serious will to do well what you did badly last year. For we are all well aware of this: Social Democracy has not made of the revolution what it should have done and can do. It has often been said, and there is no truer word: the German revolution has become a wage struggle. Higher wages and reduced working hours: you knocked that out; For that, you have used the power that the revolution has given you. But is that the goal of social democracy? Have the men of your heroic age, the Bebel and Liebknecht, suffered and argued that you earn more and work less? Have they not fought for a new social order that makes everyone a full citizen of the state, for a new economic system that ensures a dignified human existence for everyone, that is, for an idea that is not realized with the fact that you live more comfortably than before. The successes of your wage struggle mean absolutely nothing for socialism. In the great war between socialism and capitalism they are successful forays, but not victories, and (to stay in the picture) over the booty you have lost sight of the meaning of the whole war. You have let the spirit of capitalism into your souls and are now just as obsessed with it as your mortal enemies, whom you call capitalists: that is the truth.

Of course, most of the blame lies with your leaders. They have fails, failed so thoroughly, so miserably, that it makes to howl. When the revolution broke out, I made a public commitment to social democracy. Here, I told myself, are the men who want something right and who have the strength to want it. Under the old regime, bourgeois society has become full, lazy and sterile: it does not produce men of great shape. The Social Democrats, they will now get on with it, the German house, which is polluted, of the spirit of a soulless principle of authority, of the arrogance of class and education of its bourgeoisie, of the spirit of lies and phrases that billowed on thrones, pulpits and chairs, of the spirit of an unscrupulous nerd and slavery that war and revolution did not create, but only released ... they will set about sweeping the German house clean of all the filth that a period of capitalist prosperity had accumulated in it.

But what did these revolutionary heroes do? That God has mercy! They started with a world-historical stupidity: they entered the government. One can imagine how the gentlemen of the right smirked when our people, lured by the bacon of honor, into the mousetrap walked in and, friendly and ready to serve, prepared to clean up the war piggies that the others had actually done. That was a serious tactical mistake that will take revenge and has already avenged itself, since the whole burden of discontent that would naturally have built up against any government in our terribly beaten country is now thrown on you ... a serious tactical mistake, out of stupidity and Vanity. That was bad enough, but it got worse. Our government men seemed to see their main task in staying on the ever-swaying ministerial chair at all costs, and if one fell like the noble one ScheidemannIt certainly was not because he was too energetic for socialist thought. Compromises on all sides, cautious insistence on the right, democratic fraternization with ultramontanes and democrats: a political egg-dance in which one bit by bit the armor of social-democratic convictions was taken in order to be able to move more easily. Those who did not join in, like our brave Sakmann and others, were put out of action: they did not want fighters. And all this with the eternally repeated reasoning: one is now in a democratic state and one just does not have the majority. But, hell, where is the revolutionary thought? Do not you see that there are compromises that a person who represents an idea can not possibly do, because otherwise he will become the traitor best that he carries in himself? So ready were these people to compromise that they never once had the idea of ​​threatening to resign, which would have been of the best use at a time when the right wing of the Revolution was still sitting in the limbs , So ready to compromise that they have not once called the masses to cast their power for a political thought in the balance. Oh, they were so touched, our people, that they let them arrive so nicely! The others should see that the sociologist is also human, as it were, prudent, teachable, just, not a crude fanatic and wild man. Surely! So harmless, so good-natured, decent, modest, tolerable, was never a revolutionary government! Nobody was bent on a hair: neither the monarchists and militarists nor the capitalists, neither the school nor the church, neither the bureaucrats nor the sliders. Just against links you were energetic, There were principles at once. I wonder why? Well, there were real opponents, not opponents of intuition (not at all!), Because they were people who also wanted to be leaders and who began to alienate the masses from their old leaders. That was a serious matter, of course! You had to be strict.

Now those of you who are on the left will say: Yes, these were the majority people; but we from the USP and the KP, we are other guys! Dear friends, do not imagine anything! As the majority people in the Weimar school compromise Shamelessly negotiating German intellectual freedom, where were you there? In the end, is the school and church question a hot topic for you too, as it was for the Democrats, who knew how to shirk responsibility when the crisis hit? And what other real things have you done and achieved? You yelled “dictatorship of the proletariat” ─ yelled well, in every key, I admit it ─ and beguiled the masses with this magic word. But what you want to dictate, if it came down to it: history is silent. And the masses that run behind you are so unpretentious and modest: they have a new, good catchphrase; What is behind it is of little interest to them. Oh, just keep shouting your dictatorship, but beware that you don't even have to dictate! That would create a nasty embarrassment and the first embarrassment of the Social Democrats would lead to the second ... Don't you feel the deep dishonesty and the dreary sterility that lies in your bogus policy? Do you think something reasonable could come of this? Do you think you could reap where you did not sow? ... "The proletariat must come to power ... the rest will be found." Oh never! The rest will not be found. Rather, it will be found that you can destroy, but not build. And when you come to me with Russia, I say: “First show me your Lenin and Trotsky! Then we want to keep talking! "...

But what should we do now? ask some (few) of you who agree with me. I want to tell you that!

First, think a little less about your physical well-being and more about ideas. Bebel and Liebknecht did not talk about the problems of “cider”, “jam”, “sugar” and the like. The ideas are the mainspring of world affairs, the ideas win. Do a little more with the ideas of socialism! The way you deal with the intellectual property of socialism is unworthy and childish. Second: elect other men to be leaders! Not just different, but men of a different kind. That your leaders have failed must make you think. You don't have the right feel for what the leader is doing. The main thing is not that someone is a cunning dog and a good talker. The variety is no good: we saw that. And they're not just in our party. All of Germany is teeming with them, like cheese mites, and stinks from the mean routine and the slimy gossip of phrases of these loud political gates. Remember the poet's word: "It brings understanding and right sense to itself with little art". That's what we need: men of understanding and right mind. Men who think of the matter and not of their personal gain. Men who have character, a clear head and a strong will.

... Let me tell you that before you go to the ballot box. And thus commanded God!