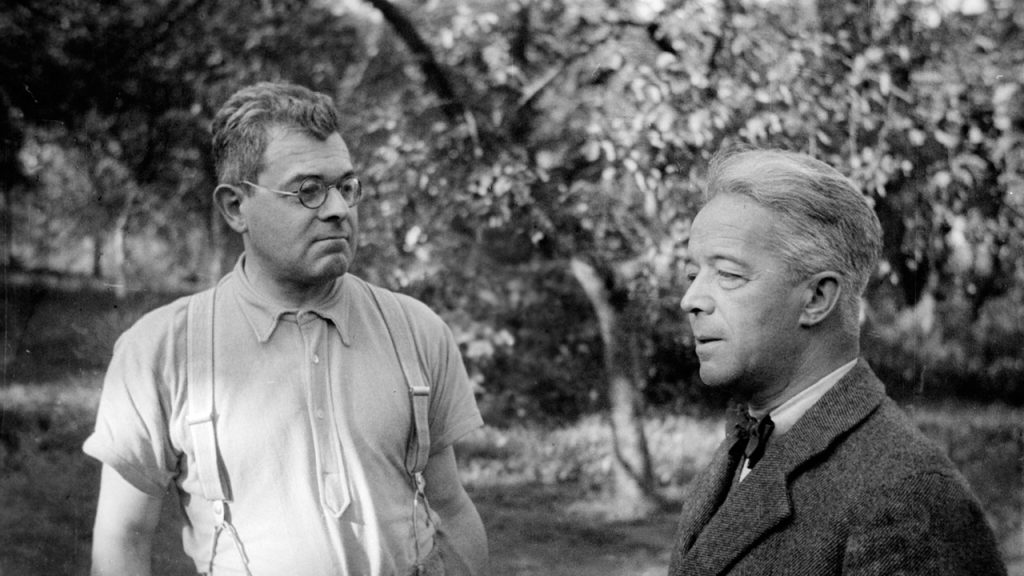 Erich Schairer with Wichard von Moellendorff in the Sulzgrieser garden

My friend brought me from Berlin and took me to Weinsberg for a walk. There he showed me the valley from the heights and reminded me: "Your Berlin is a detour, a dead end, an endless swamp. Go back to our idyll. Here is equality, happiness, fellowship, justice. Make Germany a world full of wine mountains. Overcome the new through the old. "What should I answer to that? One's heart is almost still in front of the memory image. You will find every corner of homesickness. Every crooked lane, every high roof, every walnut lures backwards. Every villa, every car sign, every chimney hurts. Why is the friend preaching? There's a locomotive whistling. Weinsberg, as much as you are still alive, smashed in the juice without breaking it: do you only thank the Middle Ages for building you up, or are you even half thanking the railway, the technology and the division of labor with Berlin? There is no turning back. Beware of the cannon fight, but also of the competition with Berlin. The traces of your crushed festivals, but also the traces of your provincial imitation of the modern, are frightening. Do not desert me. Suppose, that I am a tender lover of your museum beauty, and abdicate and prefer to boast of yourselves: we soon ruffle together for the moth-crate or for moder. If not Berlin, then London, if not London, then New York, if not New York, then Moscow would be stronger than our sentimentality. Anyway, the creator is right.

I'm back in Berlin. Every evening I flee from the fever of work into the open air, to rest, under the dampening cover of a so-called garden suburb. A poison eats me, and not only me, not only us humans, our buildings, yes our flowers: there is a thousand-flower climbing rose, which looks like the mass-produced goods of a factory. Can one conceive something more terrifying than a mechanistic grimace of nature? Perennials or horse-chestnuts that are decorated - furnished! - are quick to work quickly - at any price - to work! -?

The poison is called hurry. Berlin is a carousel. Personified tempo rushes and races and stomps over me and the others and transforms our existence into a hell. Because, so it flickers in my brain between waking and sleeping, fool who you were when you denied and left Weinsberg, certainly the creator is right, but are you turning, you turned in the circle really a creator? What has your nineteenth century, what has your machine, what has your Berlin accomplished? Did not hunger go faster than satiety? Did not progress just keep storming today's yesterday's rubbish? Where was his work? Was not his last purpose in dissolving? And can anything be changed by that, as long as you chase the faith of promoting overpopulation with the help of invention, rotation, and industry? So I dream into a new morning the horrible faces of a tormenting choice.

I will go to Weinsberg again to write down the primer that frees me from either-or. I want to have a thing in mind that is worthy of my goal or even equal. I want to have Berlin in my back as a tool; Conserving is not enough for me, I want to build. I do not like the view that "less is born and more must die". I am disgusted by the cheap nihilism, which tries nothing more because it has embarrassed itself with its romanticism and its rationality, and it disgusts me to the dizziness that secretes romanticism into rationality. I do not long for a way out of beings. I trust in the meaning of existence. I desire to unite mind and feeling without muffling it; He must be so subjugated that he serves him to satisfaction. I suspect a social order of roughly the following character:

Each Producer has the same right and obligation to produce and consume as any other Producer. Since, according to past experience, any increase in consumption requires more than proportional increase in production and therefore does not increase but diminishes happiness, society restricts its mechanistic and labor-based production to meeting the needs it recognizes as the subsistence level of its members. This production is accomplished by all able-bodied members with equal proportions, as rationally and intensively as possible. It is likely that fractions of the current average working hours suffice to secure society's subsistence minimum. Society cares about the rest of human workability only insofar as it prohibits any kind of "employer" outside of socially organized production. You may lie on your back or make music in your free time or grow fruit or decorate your dress or carve spoons or mend gutters or sell buttons; but to recruit "employees" is forbidden to you.

The gearbox Berlin and you, a cog in it, create, give you scope, not more: just scope, in which you like to form your Weinsberg, as you like it. Berlin is unable to be a creator of Weinsberg. But, within the bounds of a conscious task, it is capable of giving you five-sixths or three-quarters of your day as if you were still a Weinsberger. It has pushed all the efforts of the last decades. What was missing was the realization that "on its own" material zeal could never give birth to an idea.