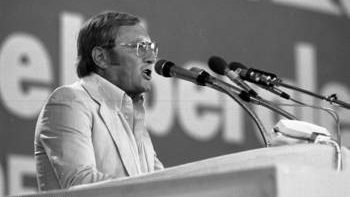 I have to spot my own nest again.

Hardly any of us who had not learned that the First World War, which ruined the conception of the Europeans, had sprung from an unfortunate chain of circumstances. The European nations, with the words of the English Prime Minister Lloyd George, are "Slipped into the war", So it is in the textbooks today, and so teach us the seniors of history from Gerhard Ritter to Hans Herzfeld.

Indeed, since Germany's sole guilt for the Second World War cannot be denied, it would be extremely practical to negotiate a second-class acquittal for Germany at least for the First World War, in line with the other four major European powers, “because of an excusable error in prohibition” .

Unfortunately, the latest research shows that there is no question of that. Even the First World War, like the Second, was born because the Bismarck Empire wanted to break the corset appropriate to its founders and conquer a world position by force, as the US only between 1940 and 1955, and that was not deliberate, held ,

Literally until the "Black day on the western front", the 8. August 1918, on which the Allies the last German squad in the "Siegfriedstellung" Germany has striven for economic supremacy over the continent, from Finland to Baku on the Caspian Sea, as well as a contiguous Central African colonial empire of the spatial extent of Australia Katanga as a crown jewel.

Until the collapse, the Reich tried to push four great powers at once, namely England, France, Russia and the allied Austria-Hungary, down to the rank of a power of inferior order. In May 1918 the decision was still made in Berlin to (to) rule Austria-Hungary economically like Poland and Russia ”. On April 7, 1917, the Reich leadership decided to secure the "economic exploitation of Turkey in peace", including the Mesopotamian oil wells.

Emperor, Chancellor and Supreme Army Command had no respect for the right to a homeland or the right to life of other peoples. The thought that 60 million Reich Germans should militarily rule around a hundred million "foreign peoples" and exploit them economically did not scare them in the least. General Ludendorff, for example, promised himself good "soldier material" from Georgia: "Our western front needs people."

As Hitler considered placing the Tyroleans in the Crimea, in the First World War Ludendorff wanted all the Germans in the Crimea in a separate state ("Crimean-Tauria" or "Tatar Republic" called) summarize how he wanted to call back all over-land and overseas Germans to local settlements that definitely belonged to other peoples.

His military emissary from Lossow - He will also be met again in the Bürgerbräukeller during the Hitler putsch in 1923 - wrote in May 1918, shortly before he did Satellite state of Georgia based, overlooking Aserbeidschan and Kuban and the northern one Caucasus: "Here is a great, rich land to be forgiven, an opportunity that may not return in many centuries." Baku, 3000 kilometers from Berlin as the crow flies, was “the second largest Naphtha-Area of ​​the earth ".

Satellite governments shot 1918 under the German rain like mushrooms from the earth, without free and mostly without elections. In Lithuania was on 4. June 1918 as "Mindaugas II." a Duke of Urach from the Catholic line King; one intended for amputation Congress Poland, which was to be "permanently" annexed to Germany militarily and economically, a Hohenzollern prince was offered. Prince Friedrich Karl of Hesse, who was elected king by the Finnish parliament on October 9, 1918, as the only legitimate shadow king, had already been advised to the Romanians. The Finns granted the German naval bases, the Romanians their oil, their grain and their railways.

Estonia, Livonia, and Courland, separated from Russia, were to be dominated economically and militarily by Germany; in the Ukraine, the German gentlemen left the Hetman Skoropadski ditch the “youngsters” of the parliamentary-socialist local regime - the government gave way to the German call “hands up!” - and immediately started nailing the railroad tracks (the hetman later co-founded the “Völkischer Beobachter”).

The first task of the local doll governments was to ensure the Germans control of the railways and all other important traffic routes, along with the exploitation of mineral resources. The ports of Nikolayev, Kherson, Sevastopol, Taganrog, Rostov and Novorossisk, all new names, were to remain in the peace of Germany.

But also about the rest of the "semi-Asian Muscovite Empire" (according to State Secretary from Jagow 1915), which was urgently called "Greater Russia", wanted the Reich to decree. It is true that the peace of Brest-Litovsk had been concluded with the Bolsheviks in March 1918 and they were recognized as the only state. But with this, as State Secretary von Kühlmann astutely remarked, the Reich leadership had by no means decreed “that the approval of the mother state is necessary to split off a peripheral state”.

If “independent” Ukraine wanted more territory from Russia, it had to be procured for her. If the Don Cossacks wanted weapons against the Soviet contracting partners of the Reich government, they had to be used clandestinely and then placed under the protection of the Reich.

One also had to march in, because - so wrote the Undersecretary of State in the Foreign Office from the bush - The "complete influence on the economic capacity of a country could not be ensured by paper agreements alone". Bussche demanded that German participation must appear not only in the Ukraine and the Caucasus, but in the entire eastern region, "however it may be, outwardly using the relevant state as a backdrop". Such was the German treaty loyalty that the Bolshevik Empire encountered when it was born.

For the rest of Russia itself, “Greater Russia”, the Undersecretary of State demanded on June 14, 1918: “The Russian transport system, industry and the whole national economy must come into our hands. We must succeed in exploiting the east for us. The interest for our war bonds can be obtained there. "

Before that, on May 16, 1918, the representatives of the twelve most important German iron and steel companies had recommended an attempt to bring railways and waterways in the entire former Russian Empire and in the Balkans under German control. At the end of 1917, the German Trade Day demanded that Russia “should be made an object of exploitation by imposing appropriate economic contracts”, and on May 30, 1918, Reich Chancellor Count Hertling of the Catholic Center declared: “Russia must become our economic domain.” The chief of the colonels Army command, Paul von Hindenburg, recognized long before his "Bohemian private": "Racial hatred is the reason for our opposition to Russia."

Real peace with Russia, as Kaiser Wilhelm wrote in the margin of the file in May 1918, after he had approved Brest-Litovsk, "is absolutely impossible between Slavs and Teutons". It “can only be sustained by fear of us. The Slavs will always hate us and remain enemies! They fear and only have respect for whoever beats them up! "

The full text of Rudolf Augstein can be found here: https://www.spiegel.de/spiegel/print/d-46163408.html