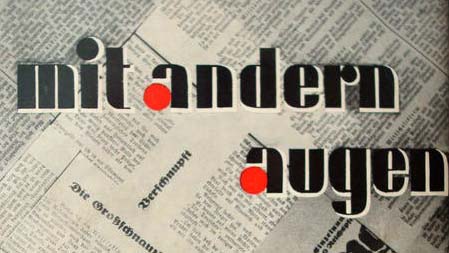 Title of the annual newspaper of the Sunday newspaper 1920-1929

“Newsprint is a transitory substance. It is generally a good thing, because what is in the newspaper is not intended for eternity, but for the moment. [...] But some of it is worth keeping a little longer on wood-free paper. "

Erich Schairer writes to accompany his first yearbook of the Sonntags-Zeitung, published in Stuttgart in 1929, in which, under the title “With other eyes”, he looks back on the first ten years of his weekly newspaper, which he grew up with during the Weimar Republic.

Schairer's journalistic and journalistic work as well as some articles by his contemporaries and epigones offer an enlightening look “with different eyes” into recent German history.

I started and published this website around the year 2000. For around twenty years it has been floating around the world without any changes. Currently, on the occasion of the coming 100th anniversary year of the foundation of the “Sonntags-Zeitung”, I have expanded its content and edited its typographical appearance.

In the "Sonntags-Zeitung" there were no further pictures besides the woodcut caricatures of Hans Gerner. To illustrate some of the articles presented here, I have also selected and added some post pictures or photos. These pictures have nothing to do with the original publication of the articles and are not included there.