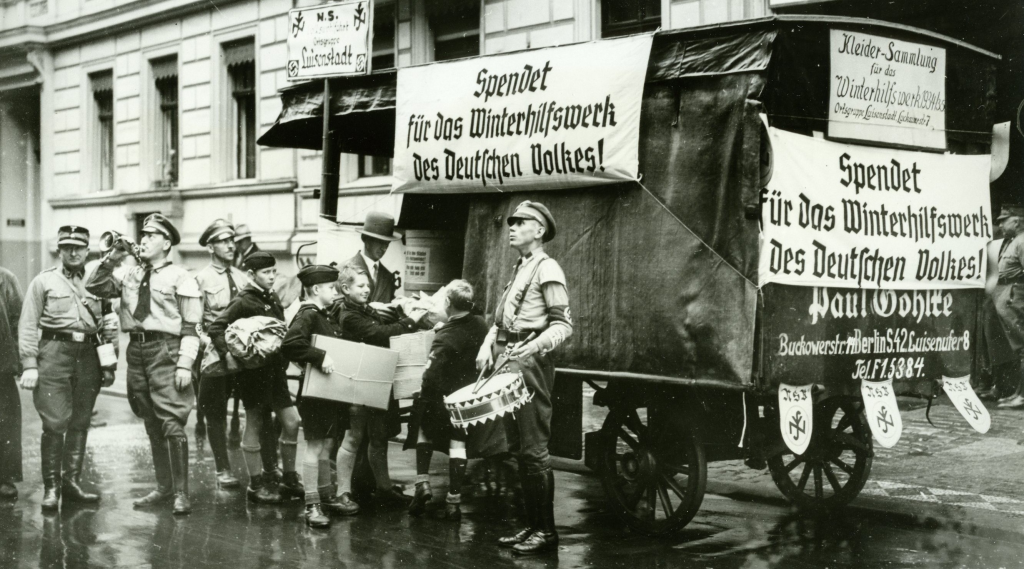 Collection carts for clothes and food donations to 1934

The millions of unemployed, yesterday still on the verge of desperation, can go to bed more cheerfully: the government has formed a large committee that is supposed to brood over the problem of unemployment, and women from Berlin society have arranged a wonderfully organized "winter aid". The Berlin newspapers are full of reports; one can see prominent personalities in pictures pursuing the extremely decorative collecting activity; The collecting box rattles on the street corners just as it does in the entertainment venues; those who keep themselves reasonably self-sufficient reach into their pockets and discover their golden heart. You wear it in the right place, that is, attached to the skirt, visible from afar, so that there is no doubt that you are part of the party.

Certainly a lot will flow together in this way, and since this time, as it is credibly assured, the apparatus will hardly incur any expenses, if all hopes are fulfilled, a few marks will probably come out for the individual unemployed in Berlin. Or maybe just for those who are worst off. It is not quite certain yet. It is not all gold that glitters, even if it is worked on "heart", but sometimes only double.

Well, it does not matter that much. Whether you drip two or seven drops of water on a hot stone, jacket is like trousers. This is horrible: that the noisy circulating national mountain has given birth to a poor little house of welfare according to a very old pattern, and that the sacrificial garbs are rattling in the shadow of a committee. Committees have always been the grave of urgent matters, but where the old stupid hope grows again and again. By the time the modest buoyancy she has now received fizzles, one will probably be gone for the worst months. Well, and then will Brüning or else you have figured out a rehabilitation program, by means of which you bring the cart so slowly back out of the dirt. At the same time, however, one will have to claim more of the golden heart of the lower strata than of those who paraded today in the fullness of a good deed with gilded pins.

And the masses, with their patience for sheep, who can truly assume a golden heart, are pushed back and forth between the plunderings of construction and dismantling and between cheap welfare actions, and here and there they thrash themselves with the exalted feeling of their political freedom and their hard-won feats Right on the street, one another's skulls or proudly carrying the flags through the streets. Meanwhile, the others sit comfortably in their offices and in the cafes and do their business even in miserable times like today; also in very bad ones; even if a large part of the others have long ago gone. Those who are degenerate just have their golden heart in the wrong place, namely: the right one. That means today as much as: stupid and hopeless.